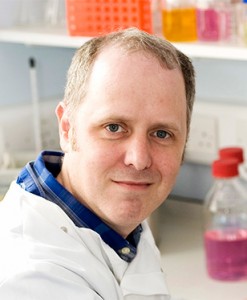 Cilia and left-right patterning: One area that we are particularly interested in is how our bodies achieve left-right asymmetric placement of our organs, such as the heart and lungs. When this goes wrong, some individuals simply show a mirror-image, left-right pattern with all of the organ positions reversed (the heart, for example, will be on the right-hand side rather than the left). This is known as situs inversus and can remain undiagnosed until a patient undergoes a scan or even surgery. More worrying is heterotaxy, where the left-right position of each organ appears to be independently established; this usually leads to very serious congenital heart defects.

Left-right patterning is first established in a small pit, called the node, present in the early embryo. Here, the rotational beating of motile cilia drives fluid leftwards across the node. This leftward fluid flow is the first left-right asymmetry event in the embryo. Immotile cilia on the cells surrounding this pit respond to the flow as it reaches the left side, leading to the first left-right asymmetry in cells. The mechanism by which flow is detected remains unclear.

We are investigating the genes Pkd1l1, encoding a putative flow receptor, and Pkd2 which encodes a calcium channel, both of which localise to the immotile cilia, to figure out whether the immotile cilia specify left and right by responding to signalling molecules or to the force of the flow.

The presence of motile cilia in the nasal sinuses and the eustacian tubes lead to PCD patients suffering chronic rhinitis and sinusitis as well as increased incidence of otitis media. Male infertility can result from immotile sperm tails (although such infertility can be overcome by the modern fertility treatment intra-cytoplasmic sperm injection). The impact on female fertility remains less clear, although there are strong claims of an increased risk of ectopic pregnancy.

In collaboration with a human PCD clinic, we have developed a model of PCD in the mouse, allowing us to study the condition in more depth and ultimately to evaluate potential treatments.